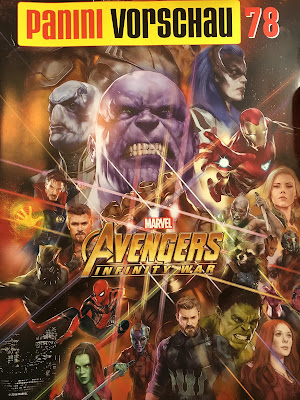 It's still a few months away until we finally see one of the pinnacles of "Phase Three" of the Marvel Cinematic Universe realized, but a few trickles of NEW STUFF have already appeared online for Marvel Studios' "Avengers: Infinity War" - the third film featuring Earth's Mightiest Heroes as well as the other heroes and players that have bee introduced since the MCU began. With Thanos making his presence known and seeking the Infinity Stones, it'll take the combined might of Earth's Heroes, as well as the Guardians of the Galaxy, to try and stem the tide against the Mad Titan and his Black Order - which is seen very prominently in this gorgeous artwork cover for the German Magazine Panini Vorschau (via Comic Book.com). The artwork of course pays homage to George Perez's "Infinity Gauntlet #1" cover - the storyline that inspires the events of this film among other classic Marvel tales.

And in case you missed it, here is the short but sweet "Big Game" TV Spot from this year's Super Bowl!

Avengers: Infinity War is set to hit theaters this May!
Posted by Timzster at Tuesday, February 06, 2018