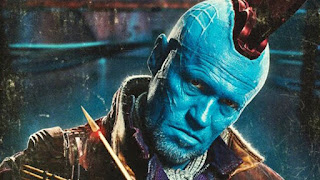 In what is certainly one of the most surprising cameo bits that just got revealed online and never made it into the final film, Marvel Studios' "Thor: Ragnarok" was actually supposed to have an unexpected guest appear in one of the film's more tense moments - and that's Yondu from Guardians of the Galaxy himself! Yes the leader of the Ravagers and Star-Lord's adoptive father would have just waltz in and made a scene with Hela and Skurge... And this is how the scene would have played out then and there.

Actually Michael Rooker's appearance was just a "goofing around" bit that was incorporated into the deleted scenes. You can check that out and more when Thor: Ragnarok hits Blu-Ray, Ultra 4K, and DVD this coming March 6!
Posted by Timzster at Sunday, February 25, 2018