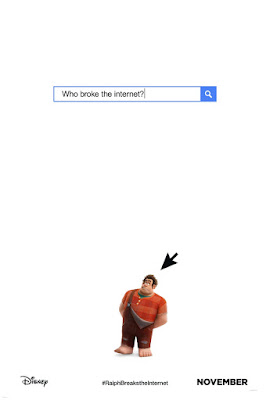 Set to be released in theaters near the end of this year, Walt Disney Animation Studios has released the first official teaser poster and trailer for "Ralph Breaks The Internet: Wreck-It Ralph 2" - the sequel to the 2012 hit animated film "Wreck-It Ralph" and featuring once again John C. Reilly as Wreck-It Ralph and Sarah Silverman as Vanellope von Schweetz!

Check out the teaser trailer below, which was shared along with the teaser poster above via Superherohype:

Wreck-It Ralph 2 will be released in theaters this November.
Posted by Timzster at Wednesday, February 28, 2018